Last week was all snakes, doughnuts and thoughts of Paris. 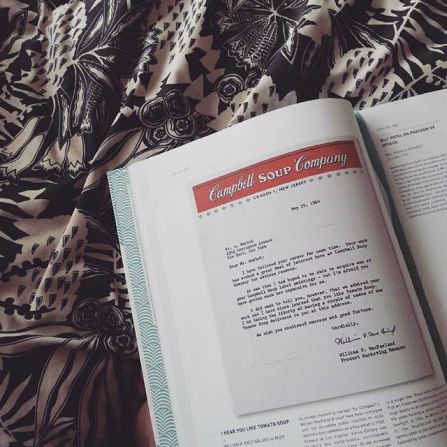 There was a snake in the house, no big deal. I don’t know if it’s still in there or moved on, slightly bigger deal. I moved a spider as big as your face from my brothers shower, it was very handsome.

I’m reading a brilliant book called Letter of Notes which is “a collection of one hundred and twenty five of the world’s most entertaining, inspiring and unusual letters”. I thoroughly enjoyed the letter of praise from the Product Marketing Manager from the Campbell Soup Company to Andy Warhol. You can read it on the Letter of Notes website.

I came to the  conclusion that  if you’re going to spend time on cooking dinner for just yourself or a couple of people, if leftovers can’t be made into tacos or toasties it’s just not worth your time!

Doughnut Time opened on the Gold Coast and Natalie braved the crowds to get herself a freebie on opening day! Then, of course went back a few days later to buy a whole box haha

We announced our next event, Nasi Campur, an Indonesian street food sensation! Book yourself a spot, this will be last secret supper of the year.

I tried the Chicken Mole burrito bowl from Goodness Gracias and it was really good. I always order the same thing, pork pibil bread envy burrito bowl (oh man it is delicious), so it was seriously hard to change it up but the whole menu sounds divine and it was the right thing to do!

After a pretty horrendous weekend in history, #prayforparis, here is a video of a French bulldog papa playing with his pups to brighten your week.

FIRST SUPPER! [sunday supper series]January 28, 2018
We'll be sharing the details of our next event shortly.